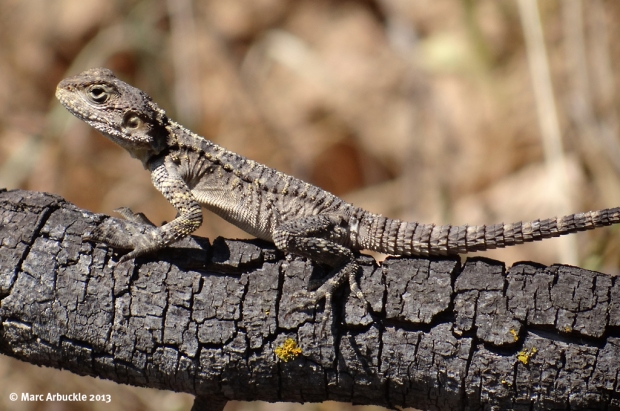 During my recent trip to Cyprus to photograph insects and butterflies I saw a lot of lizards. It was a bit of a herpetologist’s dream. In England we only have two lizards, the Viviparous and the Sand Lizard. In Cyprus there are eleven. The largest of which is the Starred Agama Laudakia stellio, also known as the Sling-tailed Agama, Star or Spiny Lizard. The Agamids, a very ancient order of reptiles are represented by only one species in Europe although there are over 300 world wide. However, there are many recognised subspecies throughout the mediterranean, particularly on the islands. Ladakia stellio cypriaca is endemic to Cyprus.

On my way to an early morning swim I’d see them basking on the rocky cliff edges, soaking up the sun, waiting motionless for unsuspecting insects or even smaller lizards to venture into range. It was possible to get remarkably close at times – good for photography – but chance it too far and quick as a flash they’d scuttle over the edge and disappear into a nearby crack or hole. Or run up a tree, they were remarkably good climbers – take a look at those claws. If they felt threatened the males would bob their heads up and down in quite a comical way. Sometimes I’d see dozens at a time. This is a common and widespread species that’s tolerant of a wide range of habitat and man, but there is some concern now about habitat loss due to coastal development and over-collection in some countries for the pet trade, especially in North Africa.

The Agamas I saw were generally a uniform browny-grey colour although some were a darker charcoal grey. I did notice that a few of the smaller ones were more patterned and mottled, some strikingly so. What I didn’t realise until I get home and did some research is just how variable in colour this species can be. In fact the colouration of both individuals and the various subspecies can vary enormously. Not only is it generally lighter when warm and darker when cold but it is capable of colour changes to suit its environment. In addition, dominant males can actually become quite brightly coloured, often showing reddish, rusty-brown, tan, blue and even turquoise colouring. Some individuals can even have pale yellow or red heads, pale or dark-spotted throats or conspicuously banded tails. The subspecies picea for example can be almost black with quite vivid orange markings. Photo courtesy of Henry Tucker.

Incidentally, if you are interested in keeping this species of lizard as a pet please be advised that wild caught specimens can be extremely nervous and difficult to tame. In comparison, captive bred specimens, especially the hybrids, can become very tame indeed.