Posts from the ‘Moths’ Category

A few weeks back I helped to show a group of Dutch scientists around Salisbury Plain. On Silk Hill we found a couple of freshly-emerged and rather spectacularly-coloured Small Elephant Hawk-moths Deilephila porcellus. It’s a pretty impressive moth with a wingspan in the range of 40-45mm. It can be found in a range of habitats but it prefers chalk and dry grass habitats where its larvae feed mostly on bedstraws Gallium.

More recently I’ve found a couple in my moth-trap along with the slightly larger Elephant Hawk-moth Deilephila elpenor.

I used to live in what is now called Royal Wootton Bassett. It was just plain old Wootton Bassett when I lived there. But then that was before we were flying back union jack covered coffins from Iraq and Afghanistan. Thankfully most of our troops are back home now.

On sunny days in July I’d often find this tiny moth in my equally tiny courtyard garden basking in the sun. When I had to move home, there it was again in my new garden near Marlborough. Now much as though it would have cheered me no end to imagine it had followed me, perhaps hidden amongst my many books, there had to be a common connection. After giving it some thought I came to the conclusion that it was either attracted to mint or marjoram, or both. END_OF_DOCUMENT_TOKEN_TO_BE_REPLACED

Recently I set off to look for the Ivy Bee Collettes hederae, no luck but as soon as I crossed the river I found this spectacular looking caterpillar. It’s the larva of the Vapourer Moth Orgyia antiqua which are sometimes called Rusty Tussock Moths. The males, which can sometimes be found flying during the day, are a rich chestnut brown colour and have two distinctive white spots on the wings. The female is unusual in that she is completely wingless and resembles an overweight furry grey grub. There’s more info and images here on the excellent UK Moths website.

END_OF_DOCUMENT_TOKEN_TO_BE_REPLACED 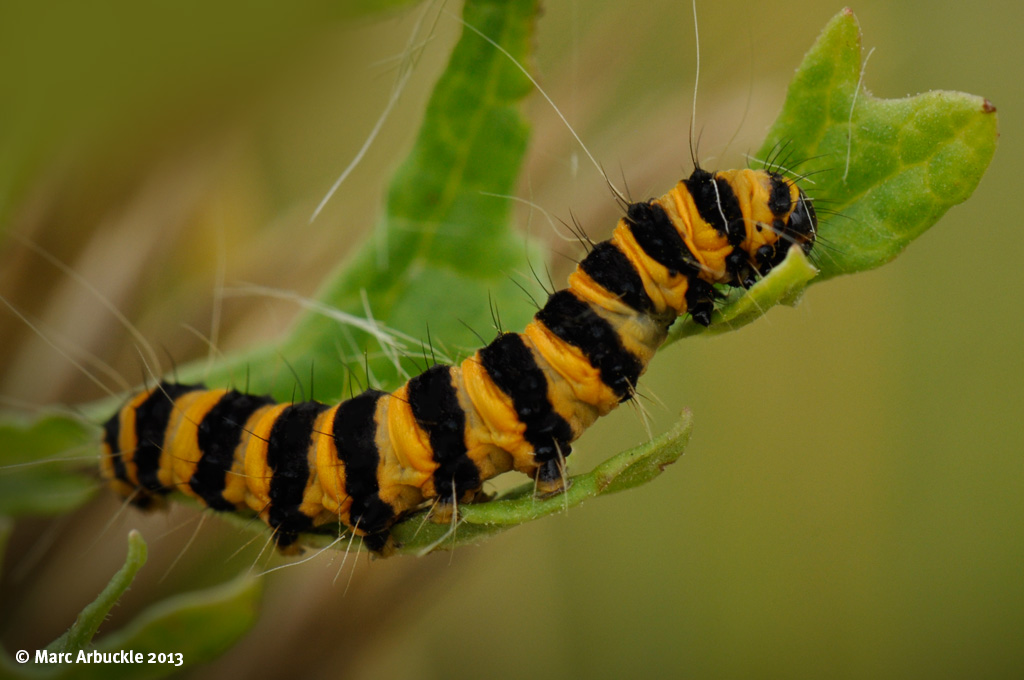 This striking gold and black and surprisingly hairy caterpillar is the larval stage of the scarlet and dark charcoal Cinnabar Moth Tyria jacobaeae. The adult can be identified by the two bright red spots and the long red stripe down the leading edge of its dark grey/black forewing and its all red hindwing. It is named after the mineral ‘cinnabar’ once used by artists as a red pigment for painting. The bright colours of both the adult and larvae are a warning to predators that it is mildly poisonous.

END_OF_DOCUMENT_TOKEN_TO_BE_REPLACED

I came across this rather attractive black and white moth whilst walking in Keilder Forest in Northumbria. It’s a Clouded Border Lomaspilas marginata. Although it’s a night-flyer it can often be found resting on undergrowth during the day. Most often in woodland and with a preference for damper localities. END_OF_DOCUMENT_TOKEN_TO_BE_REPLACED

One of the more unusual day flying moths I’ve encountered on Morgans Hill is the Mother Shipton Callistege mi which has a very distinctive cream-edged dark brown central blotch on each forewing which is said to resemble the face of an old hag or witch. Look and you’ll see a beady eye, long hooked nose, downturned mouth and knobbly chin. END_OF_DOCUMENT_TOKEN_TO_BE_REPLACED

There’s a tiger in the wood

You’ve probably gathered I’m pretty much a novice when it comes to butterflies. Well then it’ll come as no surprise that I’m even more so when it comes to moths. However, when I’m out surveying, particularly at Morgans Hill, I quite often see a few day-flying macro moths like this fantastic Wood Tiger Parasemia plantagins but if anything they’ve proved even harder to photograph. One afternoon I saw four of these, yet as soon as I brought my macro lens anywhere near they were off, catching the wind like little kites and then arching through the air 30 or 40 feet at a time. Most of the time I soon lost track of them across the steep terrain. But I guess eventually I had to get lucky and eventually I did. This little male sat still for a split second longer than usual and here’s the result. END_OF_DOCUMENT_TOKEN_TO_BE_REPLACED

There’s a wet tiger in the garden

I’ve been trying to organise a walk with a couple of my colleagues from work, but we’ve had to cancel twice now because of the incessant rain. We’re not bothered about getting a bit wet, it’s just that I’m taking them to two of Wiltshire Wildlife Trust’s nature reserves where I do a bit of surveying and hope to show them a few of our rarer butterflies and some day-flying moths. Today in between the downpours I found a couple of half-drowned Scarlet Tiger moths Callimorpha dominula in my garden, as you can probably see they were pretty sodden. I put this one on this leaf in the hope that it might dry out a bit. From what I’ve heard the weather has not been kind to butterflies or moths this year. END_OF_DOCUMENT_TOKEN_TO_BE_REPLACED