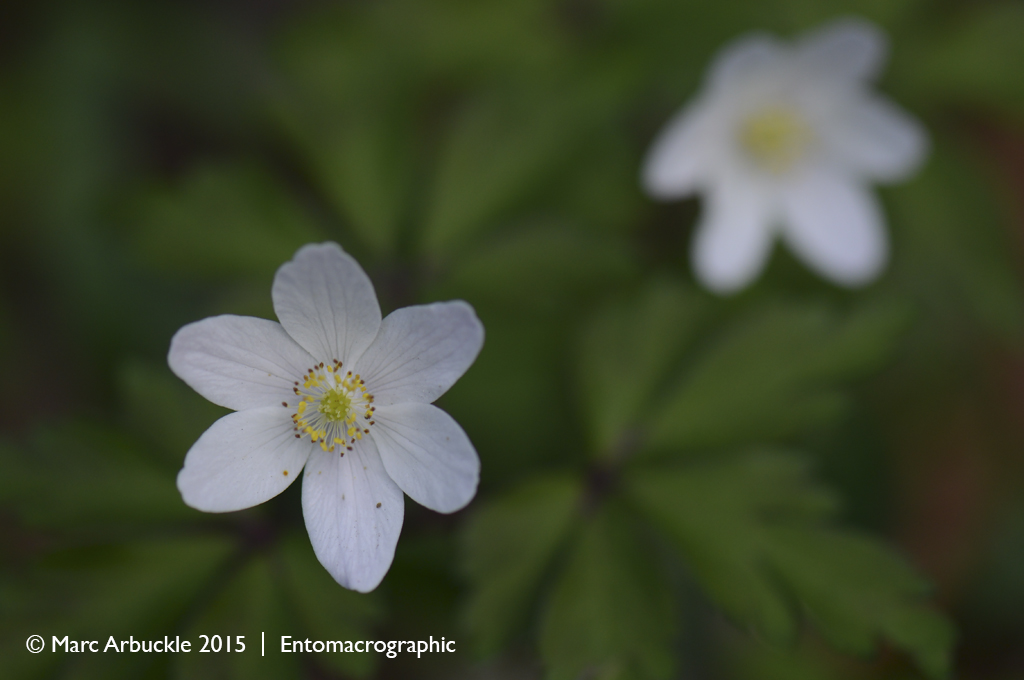 Stretching on red spindle stems through still sleepy foliage to find the warmth of the vernal sun, this has got to be one of my favourite Spring flowers. The Wood Anemone Anemone nemorosa is a splendid sight when its tiny stars form a white carpet on a woodland floor.

The six white petals (technically its sepals) are sometimes streaked with just the slightest hint of purple-pink and can be softly shaded with lavender on the reverse. A delicate blue version Anemone appennina is sometimes grown in gardens and often becomes naturalised which may account for the odd colour variation.

It’s found flowering as early as March, but Spring appears to have been a little late this year so enjoy them while you can. These were photographed at West Woods, near Marlborough, Wiltshire.

Seen your first butterfly yet? 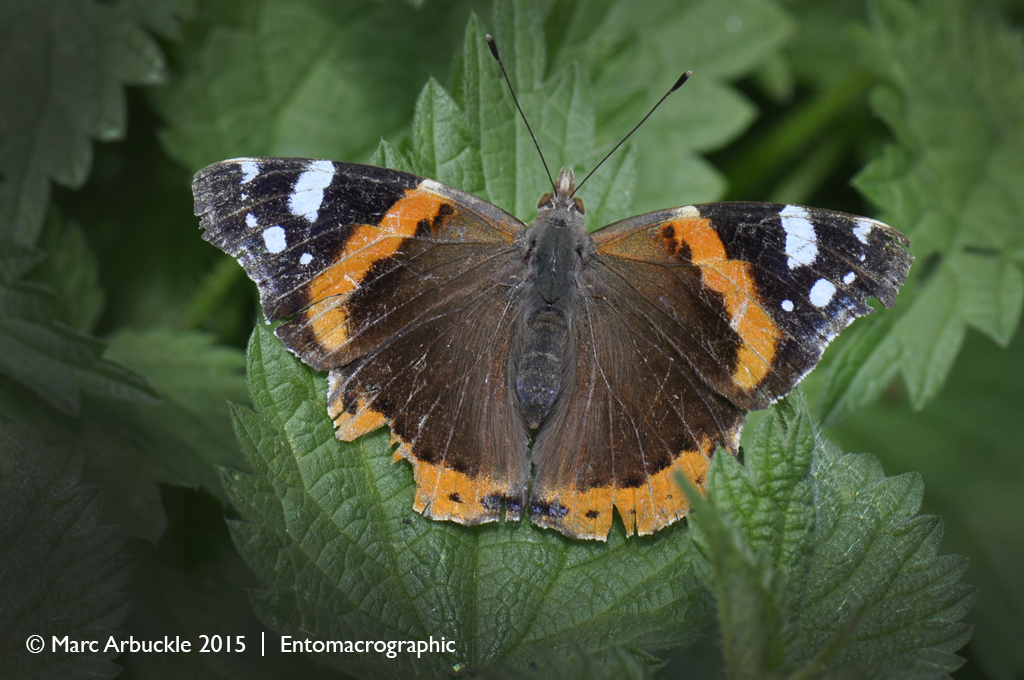 As I left the office for lunch the other day (Wednesday 28 January) I saw my first butterfly of 2015, a rather tatty Red Admiral Vanessa atalanta similar to this one I photographed last year. This took me by surprise momentarily as it was quite a cold day. It was fluttering around inside the glass canopy that covers the Holly-lined pathway that leads to the entrance of the building and that I suspect was the reason. The combination of the low winter sun and the shelter from the icy wind had warmed it sufficiently to have woken it from its slumber.

The Red Admiral is predominantly a summer migrant that most often arrives in the UK in May and June but a small population do overwinter in the south of Britain and therefore this butterfly is also considered a resident. Unfortunately this hibernation strategy is a risk as many individuals will not survive our winter unless conditions are mild.

However, global warming may help it to become more firmly established as a resident species in the future.

Have you seen your first butterfly of 2015 yet? 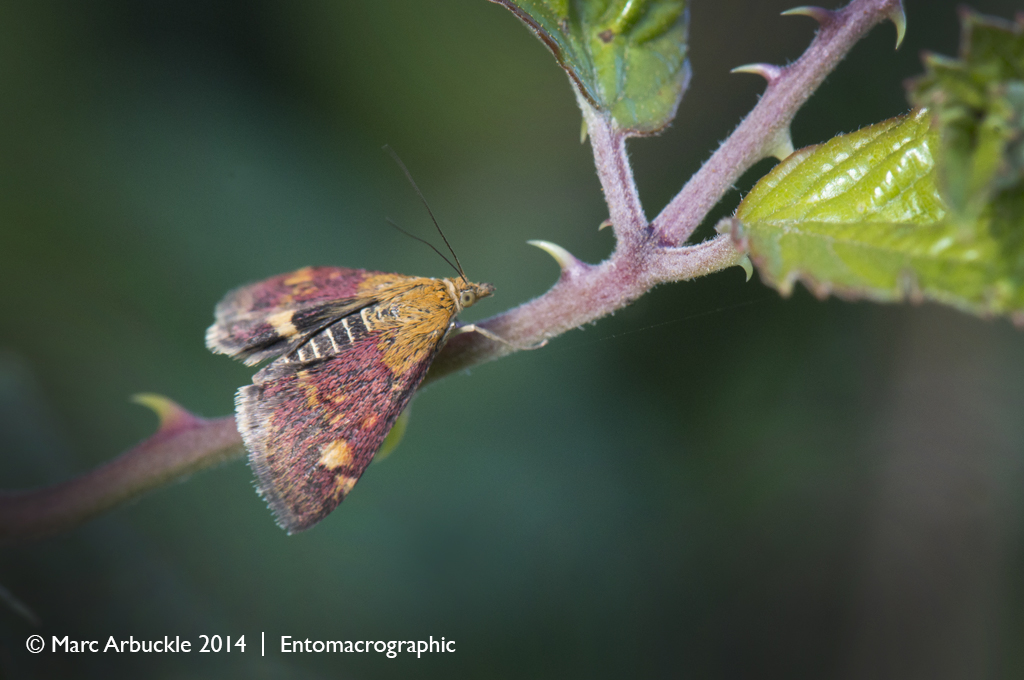 I used to live in what is now called Royal Wootton Bassett. It was just plain old Wootton Bassett when I lived there. But then that was before we were flying back union jack covered coffins from Iraq and Afghanistan. Thankfully most of our troops are back home now.

On sunny days in July I’d often find this tiny moth in my equally tiny courtyard garden basking in the sun. When I had to move home, there it was again in my new garden near Marlborough. Now much as though it would have cheered me no end to imagine it had followed me, perhaps hidden amongst my many books, there had to be a common connection. After giving it some thought I came to the conclusion that it was either attracted to mint or marjoram, or both. END_OF_DOCUMENT_TOKEN_TO_BE_REPLACED 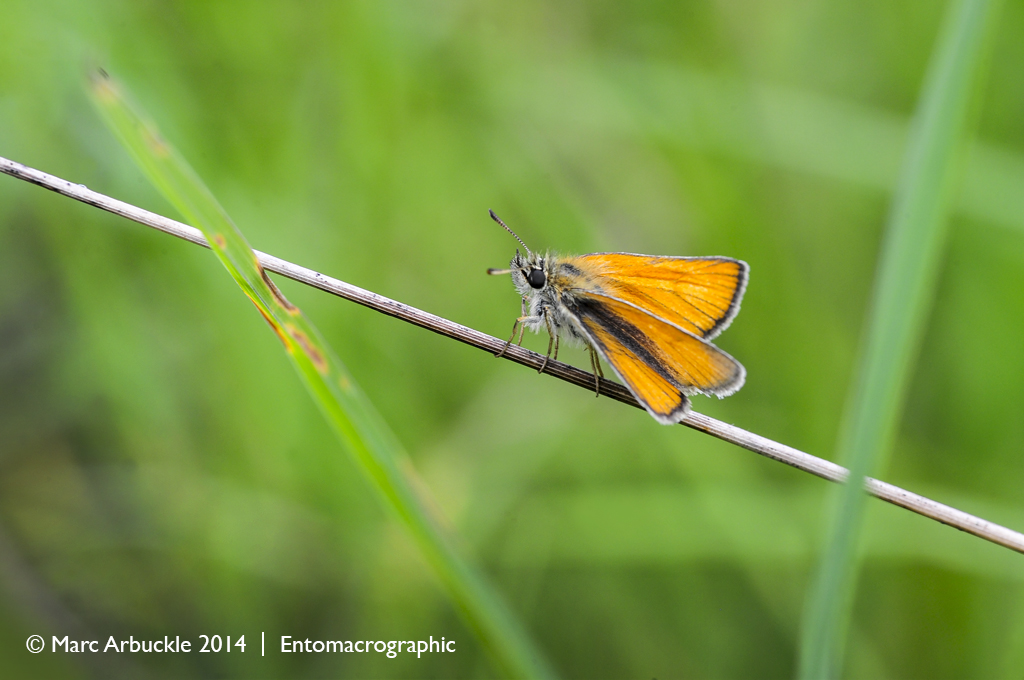 Here’s a photo from Morgans Hill that I took back in July of a female Essex Skipper Thymelicus lineola. Followers in North America may recognise this butterfly as the European Skipper. It closely resembles our Small Skipper Thymelicus sylvestris which it is often found in company with, but that species lacks the black tips to its antenna.

Because of the similarities, it is often under-recorded and for this reason was not recognised as a separate species until 1889. As such it was the last British resident species to be described.

END_OF_DOCUMENT_TOKEN_TO_BE_REPLACED

Far beyond the pale horizon 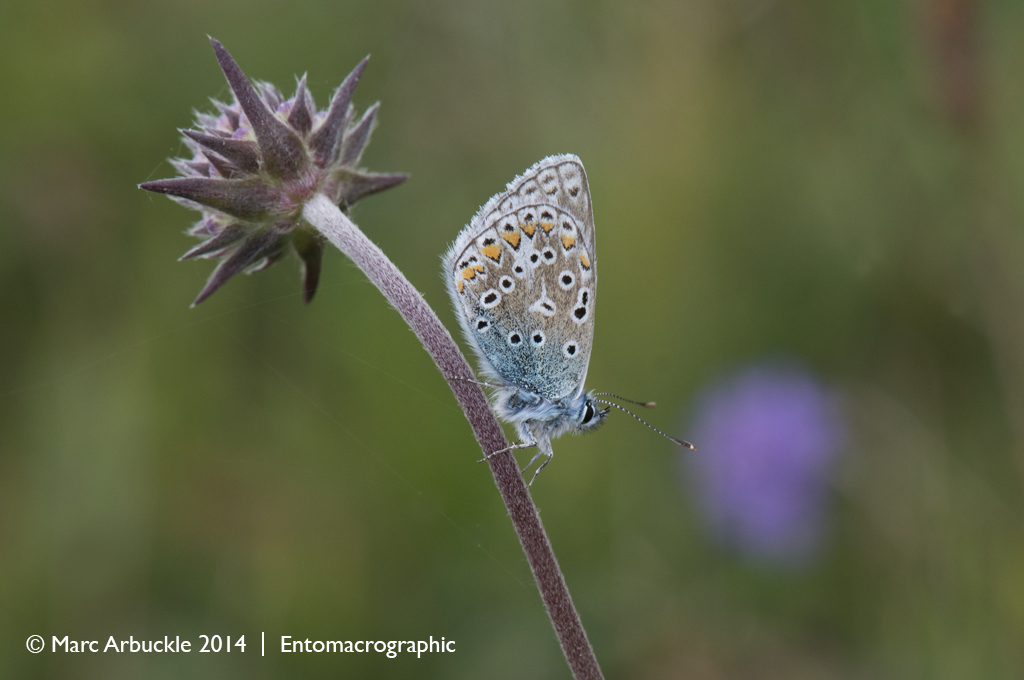 I’ve recently taken on the role of Entomology Sub-group leader for the Larkhill & Westdown Conservation Group. LWCG is one of three conservation groups that have access to some of the restricted areas of the Salisbury Plain Training Area (SPTA) which is where I took this photograph of a female Common Blue Polyommatus icarus resting on Devils-bit Scabious Succisa pratensis.

END_OF_DOCUMENT_TOKEN_TO_BE_REPLACED 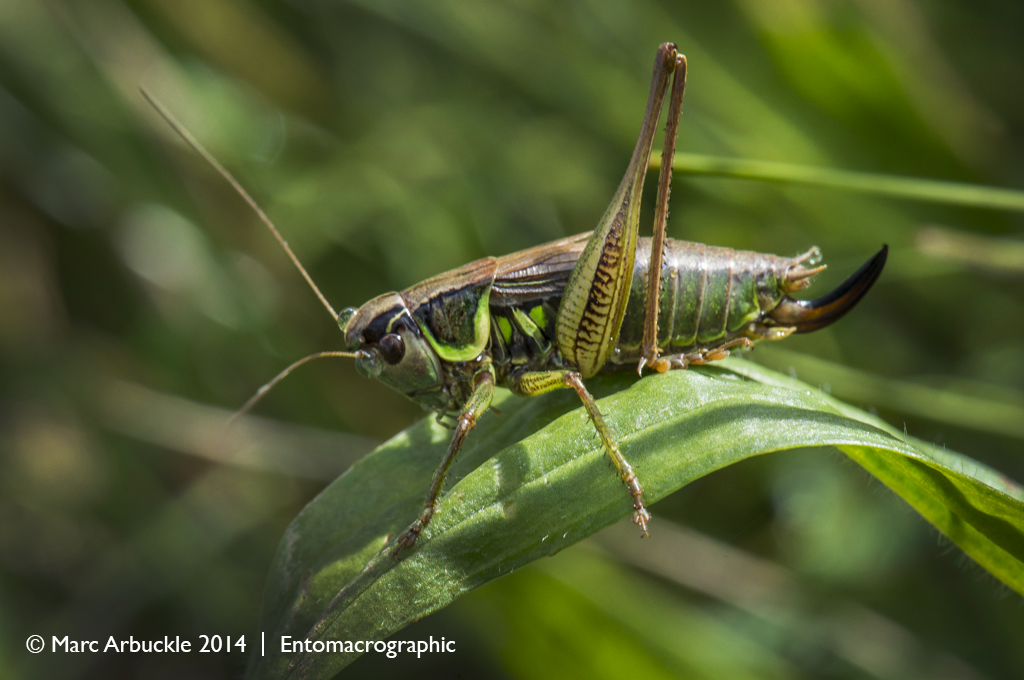 Taking macro photos of insects is as much about luck as anything. But of course you increase your luck by being out there. I was laying on Morgans Hill trying to take a photograph of a grasshopper when this little lady crawled out of the grass allowing me to get this side-on shot. It’s a female Roesel’s Bush-cricket Metrioptera roeselii. You can tell it is a female by the scythe-like ovipositor and that it is Roesel’s by the yellow/green edge to the pronotum and the three spots/patches just behind on the abdomen.

Roesel’s are normally brown or yellow-brown with a hint of green and maybe a touch of red but this may be the rarer green form.

This is a cricket that was rare in Britain prior to the 20th Century and pretty much only found on the South-East coast of England. Since then it has rapidly increased its range in the South, to the North and West possibly helped by the rough grassland found along the sides of many of our roads which have provided it with ‘corridors’ inland.

It favours damp grassland that is relatively undisturbed. The male’s high pitched stridulation is meant to sound like the crackle of overhead electricity cables. Have a listen here thanks to http://www.orthoptera.org.uk

It’s also said to be reminiscent of the song of the Savi’s warbler. You can listen to that here thanks to http://www.rspb.org

Let me know what you think? 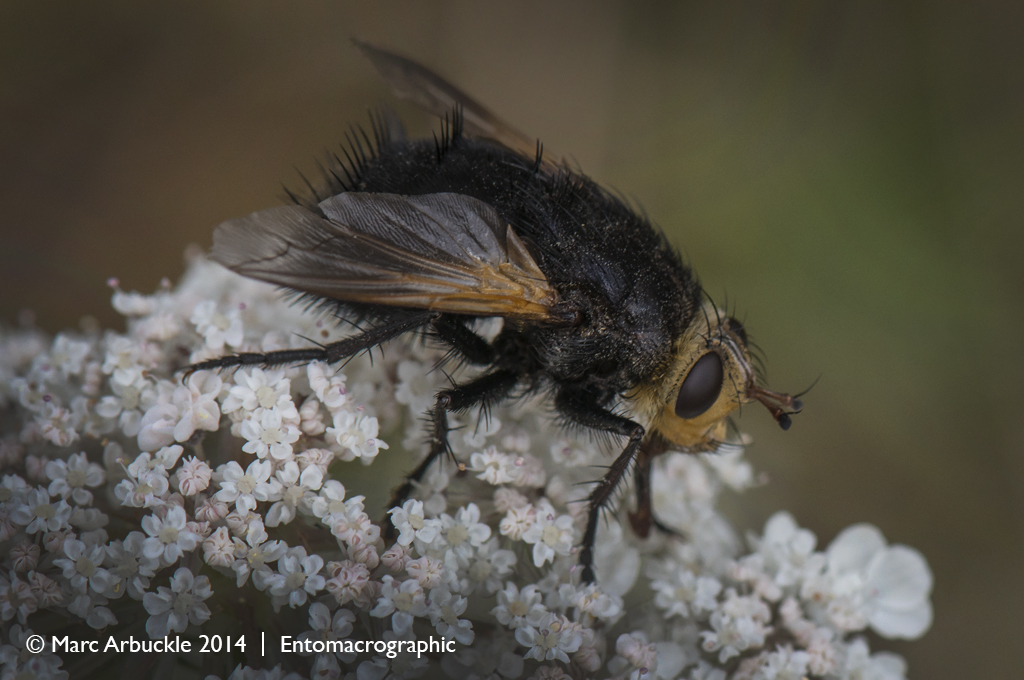 Last weekend I managed an early morning trip to Martin Down in Hampshire. In many ways it felt like the last day of summer. Certainly many of the butterflies, particularly the Dark Green Fritillaries and many of the Skippers were well past their best, distinctly tatty. But I usually find something interesting to gawp at and this time it was this wee beastie, the Giant Tachinid Fly Tachina grossa. END_OF_DOCUMENT_TOKEN_TO_BE_REPLACED 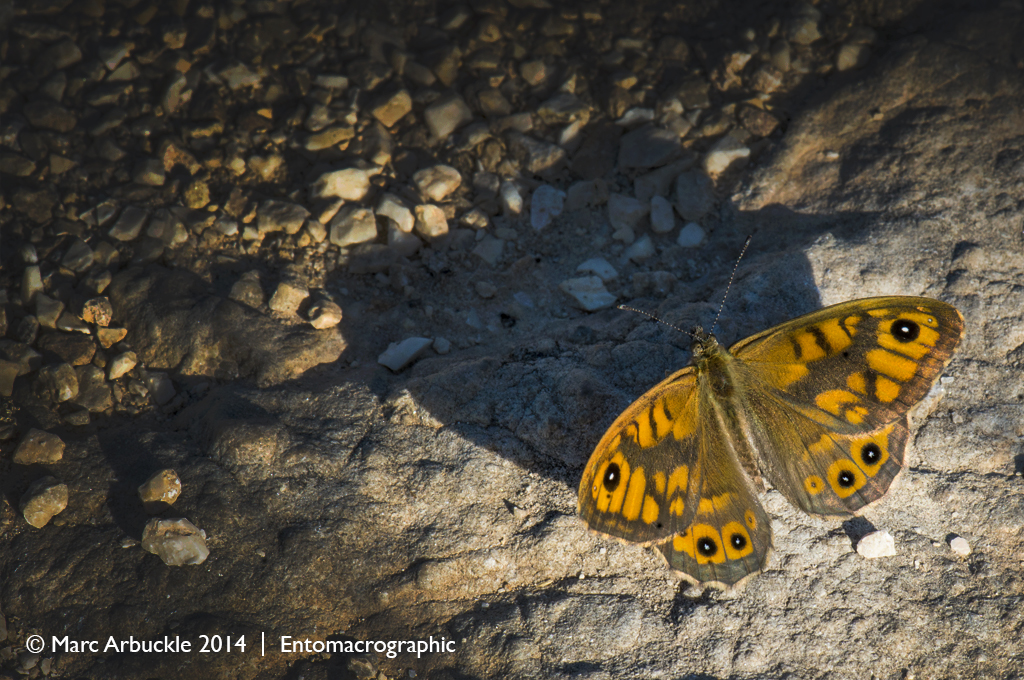 In an earlier post I mentioned my early morning walks in Kefalonia. I often get up really early when on holiday as the light is less harsh and as it is marginally cooler, insects can be more settled and easier to photograph. Although, that said, in Kefalonia even at first light it was still way into the twenties. So on quite a few mornings dawn saw me make the steep climb up through the pine trees to the ancient hill fortress overlooking the pretty fishing village of Assos.

It was always worth getting out of bed though as the castle was ‘the place’ for butterflies and one of the ruined bastions proved to be a real hot spot for the Wall Lasiommata megera which loves to bask on walls, rocks, stones and bare ground. This is a butterfly we get here in Wiltshire, see my earlier post here but it’s not one I’ve seen so far this year. The Wall, or Wall Brown as it is sometimes known, is fairly widely distributed in England, I’ve seen it way up in Northumbria for example but it rarely occurs in large numbers. In the last decade or so it has declined substantially due to a continuing loss of habitat and it is now a priority species for conservation. So it was a blessing to see so many and have the time to study them in detail.

Often it was just me and the Megera, these mythical daughters of Creon, king of Thebes. Under the shade of an obliging olive tree I spent many peaceful hours watching these orange and brown furies flit in and out of the sunlight. The only sounds the over excited squeals of alpine swifts above my head and the distant crashing of waves on the rocks far below.

The lesser of two weevils 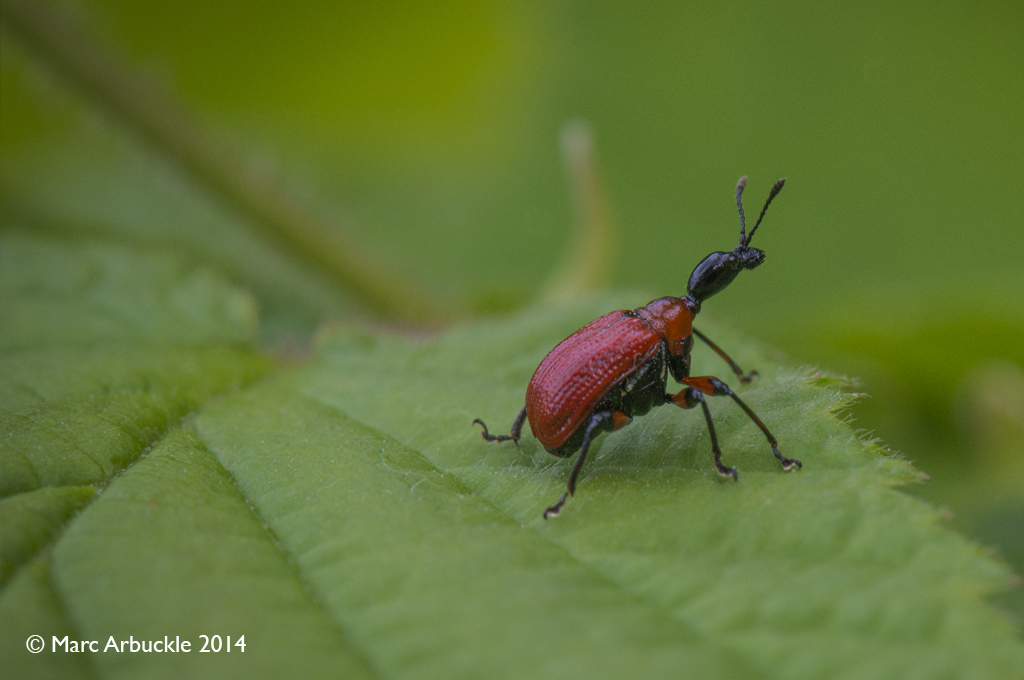 Whilst looking for Adonis Blue butterflies on West Yatton Down I discovered this little chap standing on a Hazel leaf. Further investigation revealed it to be a Hazel-leaf roller weevil Apoderus coryli.

It’s a beetle belonging to the family Attelabidae subfamily Attelaninae which are sometimes called giraffe weevils for rather obvious reasons. These primitive insects have a bell-shaped thorax (pronotum) and rather protruding eyes.

END_OF_DOCUMENT_TOKEN_TO_BE_REPLACED 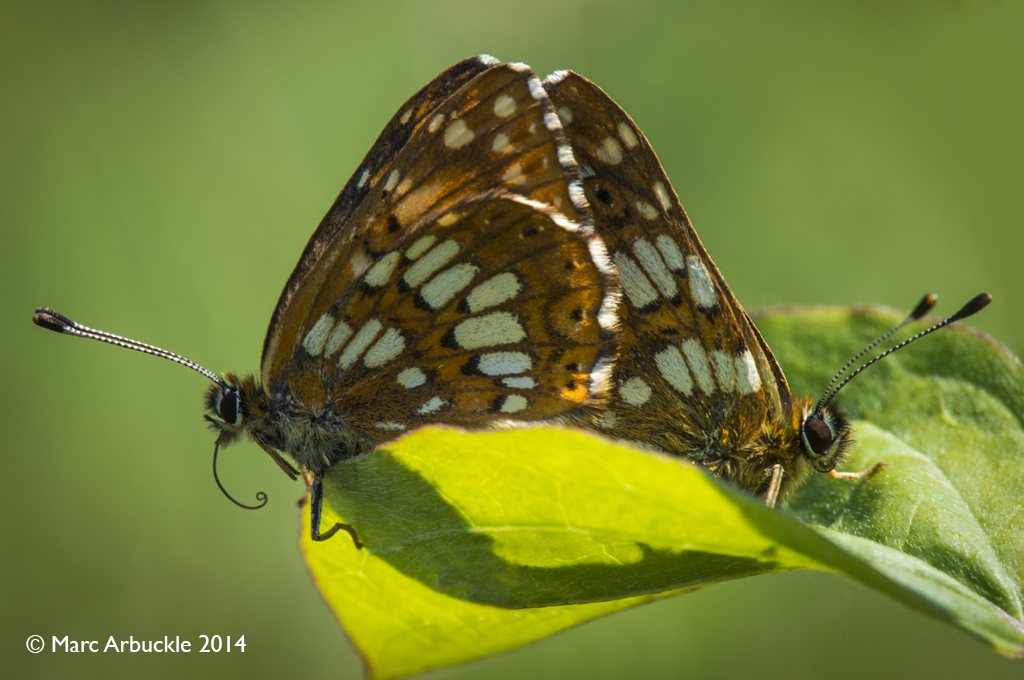 Inching along the crest of the hillside I approached ‘the hole’ with some trepidation. A somewhat optimistic visit a few weeks earlier had revealed that someone had used a tractor with a rotary cutter to flail the bramble and blackthorn to the ground and deep into the boundary hedge. To say I was a tadge cross would be to put it mildly, I may have even said a naughty word. This after all is ‘the hidden place’ that I’ve sworn to secrecy and as it is one of the few remaining spots in Wiltshire where it is possible to see good numbers of Duke of Burgundy Hamearis lucina and no people, other than the occasional dog walker, it is my entirely selfish intention to keep it so.